Originally, the sagamité of America 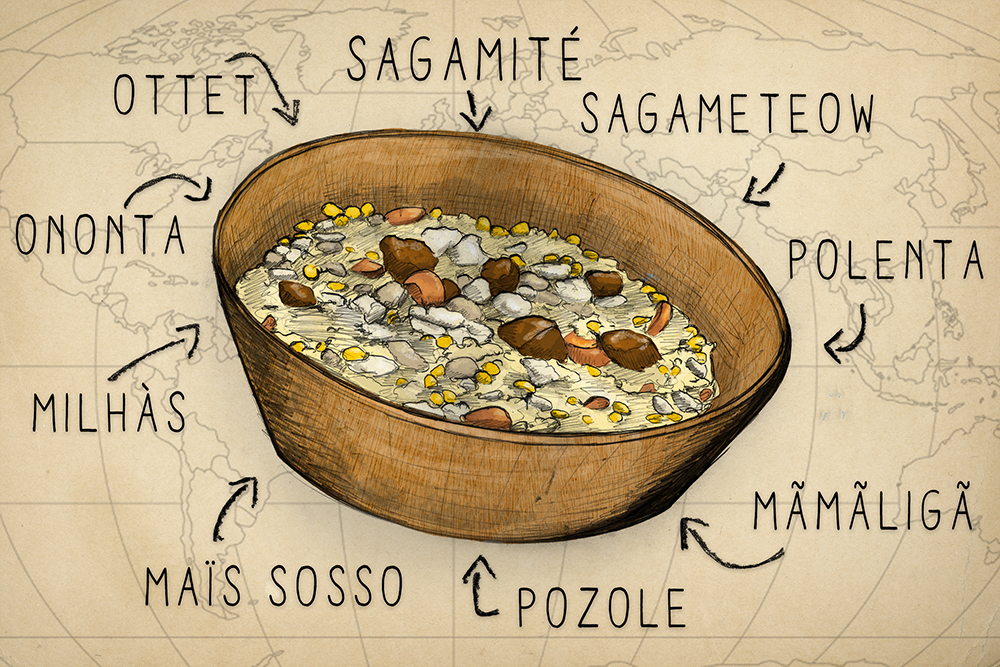 Originally, the sagamité of America

Practice of pre-Columbian origin, become a proven dish of North American indigenous cuisine. Sagamité consisted of thickening a broth with cornmeal. There is so much to say about this revealing practice of America, but let us linger for a few lines on the name itself: sagamité.

Let’s bestow the origin of our sagamité to the Iroquoian nations who lived near the Great Lakes. Notably to the Huron and Mohawk for whom, very oddly, the name of sagamité took the form of Ottet and Ononta at home. Let us attribute this linguistic gap to the simple fact that sagamité is in fact a French version of its Algonquin alter ego: sagameteow.

In fact, this distance is mainly due to the babbling internationalization that took place on the edge of the Great Lakes. Reminiscence that some would deem severe cultural appropriation today, but hey … let’s continue anyway. It is probably in contact with Iroquoians trading around the Great Lakes that some Algonquian nations such as the Cree and Algonquins have absorbed the practice of thickening broth with corn. Without difficulty, they would have extended this Iroquoian practice in a new light composed of multiple linguistic subtleties peculiar to each Algonquian nation.

We only have to dive into the mixed world of coureurs des bois and other “hinterland delinquents” to see, black and white, that sagamité literally fed the narrative of these “feral” people. Also known as soupane in some so-called “civilized” roots of New France. This variation will turn out against all odds, to be a French adaptation of Supwan, a – brace yourself – Dutch word that can only have popped up here only since the old colony of New Amsterdam; New York for those familiar.

But all in all, save one thing from this capsule: remember that the ritual related to the preparation of any type of oatmeal made from corn is basically native to America and that it is up to us to let it be known. At least, think about it the next time someone will tell you unconsciously that his sagamité is called: polenta, milhàs, corn sosso, mãmãligã, pozole …